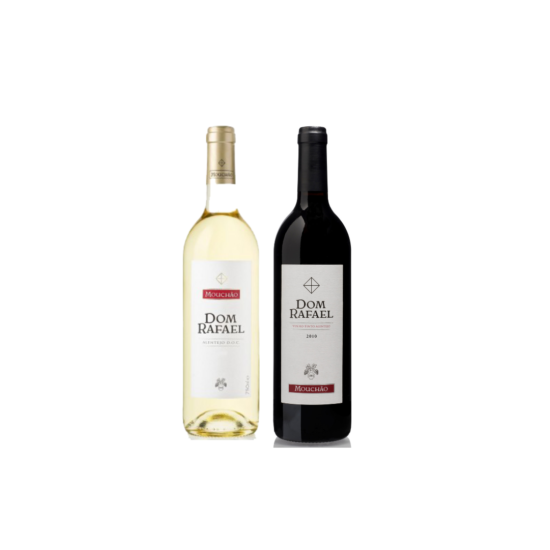 “Even in this tough vintage, the wine is bright and elegant, with a juicy, red berry-laced finish. These wines can age a bit, but most will likely be best in their first decade, including this one.” Mark Squires, Robert Parker

Grape Varieties: Alicante Bouschet, Aragonez, Trincadeira
Tasting Notes: Deep garnet in colour with a complex aroma mix of notes of ripe plums with red peppers, mint and spices. The mix shows an elegant freshness and good balance. The strong tanins are smooth, prolonging the presence of the wine.
Vintage: 2015
Alcohol: 13.5%

Grape Varieties: Antão Vaz, Arinto, Fernão Pires and Ferrum
Tasting Notes: With a striking citric colour, the wine exhibits the minerality of the Arinto grape variety and a tropical freshness of the Antão Vaz. A wine presented with a great balance, an elegant structure, an immense freshness and a long finish.
Vintage: 2015
Alcohol: 13.5%

Best Served at 8 to 14 degrees

Pairing Suggestions: The wines are easy enough to be entertaining all night at your dinner parties!

The fine, rolling landscape of Portugal’s Alentejo region, set between Lisbon and the Algarve, is dominated by cork forests and olive groves. In the early 19th century, Thomas Reynolds moved here from Oporto, chiefly to become involved in the cork business.

Three generations later, his grandson, John Reynolds, purchased a 900 hectare property with two small rivers running through it – Herdade do Mouchão. In addition to the family’s cork activities, he set about making wine. Vineyards were planted and in 1901 he built a high-ceilinged adobe winery (or “adega”) with white washed walls and a traditional red-tiled roof. Following the 1974 revolution, the estate was expropriated and only returned to the family in 1985. Today, the Herdade do Mouchão continues to be run by the descendants of the original family whose cellar and vineyard workers have been with them for generations. The process is, as it always has been, unhurried. The grape varieties are local, picked by hand and foot-trodden.

In the ever-changing world of winemaking, Herdade do Mouchão, remains a traditional, family-run winery. The 38 hectares of vines are made up of several vineyards in different areas of the estate. The earliest planting took place on the flat, low-lying ground near the winery (adega), which is particularly suited to the Alicante Bouschet grape.
This grape variety, never much prized in its native France, thrives on the terroir of Herdade do Mouchão (230 metres above sea level). Since its introduction, in the late 19th century, it has adapted well to the clay soil, the intense summer heat and the erratic winter rainfall, withstanding the occasional frost. Other vineyards, on higher and well-drained ground, are planted with red varieties such as Trincadeira, Aragonês, Touriga Nacional, Touriga Franca and Syrah. Here there are also a limited number of white varieties, mainly Antão Vaz, Arinto and Perrum.

Sign-up to be a member of Clube de Vinho!

Join us today to get a 5% discount on your first order.

Please check your email to confirm your subscription.